Đurđa Fočić-Šourek a celebrated athlete that participated three times at the Olympics and for years was the icon of Croatian athletics that used her love of sport in her second career. 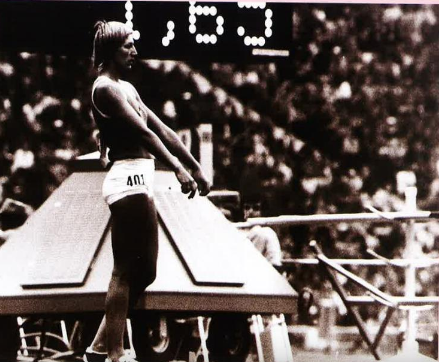 Đurđa Fočić – Šourek has left a big mark on athletics in Croatia. She won numerous national and international titles and competed at the Olympic games in pentathlon. In 1968 she finished 17th and in 1972 and 1976 she was 11th. At the Mediterranean games in 1967 she won three silver medals in 80 meters with hurdles, long jump and high jump. At the 1971 Mediterranean games she won two bronze medals in 100 meters with hurdles and in the 4×100 relay. At the 1975 Mediterranean games she won one silver medal in 4×400 relay and two bronze medals in high jump and 100 meters with hurdles. She is a winner of the Franjo Bučar Croatia state award for achievements in sport. She has won the Mladost trophy for best female athlete five times and the Mladost life achievement award.

Đurđa started training athletics at the age of 18, which was at the time considered the regular time to start. She dedicated herself very quickly to hard training, competition and travelling around the world in athletic world cups. However, when asked to give a recommendation and advice to the younger athletes, she didn’t hesitate much to stress the importance of never letting go of education. She always balanced between her sport time and education, until she finished her studies at the Faculty of Economics and started working in the Zagreb Sport Union (under different organisation names) where in 1991 she was asked to engage in the municipal administration for sports in the City of Zagreb. In the municipal administration she became head of the unit, and later even the assistant to the Head of the Office for Sport, Culture and Education in the City of Zagreb.

Đurđa was also a member of the board of the Croatian Olympic committee. She also devoted her time to HAŠK Mladost as a member of the Executive Board during the 2000’s. Today she is retired, after having a fantastic sports career and a respectable professional career in sport administration. She always balanced between her sports part of life and professional career giving herself just enough to fulfil all the job requirements and what the administration asked from her. The same concept she used when studying – make all the fulfilments for the university, and use all the remaining time for training and sports.

As a woman she never felt discriminated and overpowered by men. She had the support of her family, so it was easier, but coming from a middle-class environment she was always driven to move forward and be creative and productive. Aa a woman of profession in the sport administration she had the benefit of applying her athlete skills and endurance to be more efficient and successful.

Đurđa emphasises the importance of never leaving the education process during the peak in sport career, no matter what lucrative material awards it brings. She believes that one should develop a career based on education, and not on sports.