Naide Gomes was one of the Portuguese greatest athletes all times, who as learned to be resilient since an early age and from that age, the word “quitting” is not part of her vocabulary.

She is a woman of conviction and always has a smile on her face. For Naide pressure is not a burden, it is a stimulus, and she believes that persistence, hard work, indomitable will, discipline, humility, passion and love, inevitably lead us to success.

Naide was born in Sao Tome and Principe and started her sports career with 13 years old (about that age). 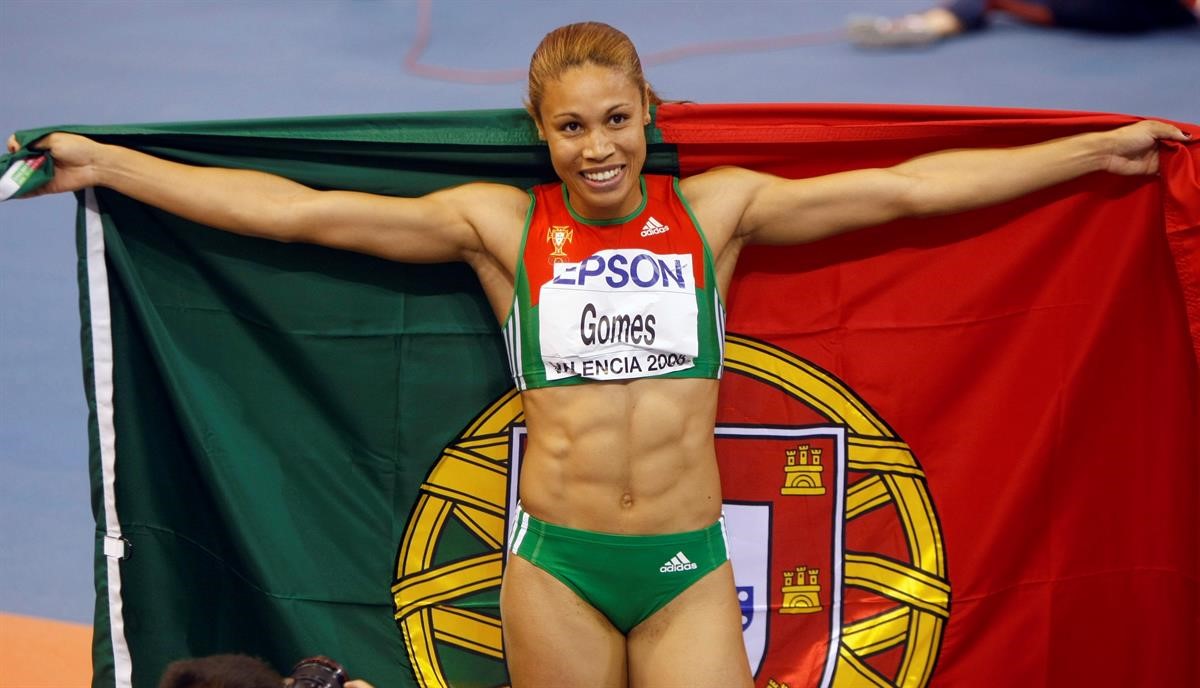 An interview with Naide Gomez

Naide, what made you start on sports?

I came to Portugal to study and I have stood out in school competitions where my physical education teacher invited me to join the school team. And that’s how my sports career began, at school.

How did you manage with your studies?

I always tried to reconcile everything and I never neglected school once that was the main reason why we moved to Portugal. When it all started I have promised my mother that I would never neglect school, and I have always honored that promise.

Can you tell us a little about your career?

I was born in S. Tomé e Principe, and there I didn’t support any team neither haven’t watched any football game. When I arrived in Portugal I went to school and my friends were talking about the Portuguese teams. I have asked one of my friends which team he supported, and he replied: “Sporting Clube de Portugal”, and from that moment I start supporting Sporting Clube de Portugal and became a very passionate about the team.

One of my dreams was to be part of this great team, and there was a beautiful year in which I was one of the best in Portugal, and our dear Professor Moniz Pereira invited me to join the Sporting Clube de Portugal team. This was one of the happiest days of my life because I wanted to join Sporting Clube de Portugal, but not because I’ve asked, but because I deserve it. And so it was.

As soon as I joined Sporting Clube de Portugal, I receive a lot of help so that I could do both: study and train. It made my life much easier, it gave me better conditions to be able to evolve, not only financially, but also at a technical level.

At Sporting Clube de Portugal I’ve started to train with coach Abreu Matos, who was my coach until I finished my sports career and with whom I worked immensely. Initially, I did combined tests, later, due to an injury, I started on the long jump, where I stood out at the world level, and I also won many medals, which are 12 in total. I was also a world champion in pentathlon, in long jump and so on.

One of my biggest dreams was to be an Olympic champion… which I did not get, but I had it very close! The sport world is like that; you cannot always achieve all the goals as you would like.

I have followed my life.

Can you tell us about a down moment of your career?

I continued my career until a serious injury hit my dream of participating in the 2012 Olympic Games.

Two months before the Olympic Games I have injured the Achilles tendon. I had a chirurgical intervention and tried again, but I continued to have pain … I tried another surgery and I tried to get back and fail again. I tried the third surgery and tried again.

I’m tough in the fall! But after trying so many attempts I saw that was impossible to bring back that Naide Gomes I used to be, which won great medals and achieved great results. Naide Gomes everyone got used and used to me. I saw that it was not possible to return and so I decided to end my career and it was then that I also discovered that I was pregnant, so the decision was easier.

How is your life after your sports career?

In 2014 I finished my degree in physiotherapy, this achievement was also one of my great dreams. I was able to finish my education, and owed this to my mother, for the effort she made to educate me and my sister, with the all sacrifice she made, alone…creating two daughters alone is a very difficult task.

So, I’ve graduated and as soon as I finished my sports career I started working at Sporting Clube de Portugal as a physiotherapist and I’m still here.

At this moment I do three years of work in the Olympic Department and in the Medical Office, where I am a physiotherapist of some sports disciplines of the club. I am a mother, I have two small children, one with 3 years and one with 1 year and I am a happy woman. Obviously I miss that competitive stimulus, that daily goal of training and the adrenaline and the feelings, that will always be missing. I will always miss it, but life goes on, there are other stimuli, other goals, other dreams to fulfill. 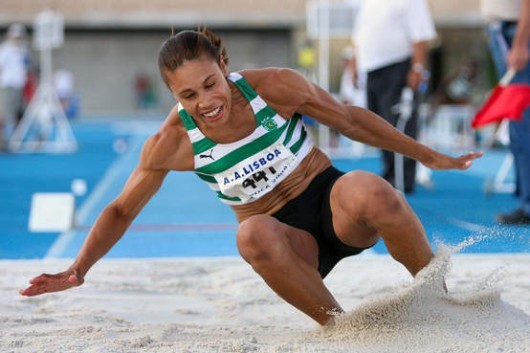 Who was Naide Gomes to you?

Naide is a woman who I admire a lot. I remember seeing her compete, the claw and passion with which she did it. I remember seeing the whole nation cheering for her. We were all with her in those competitions. We ran and jumped with her, and we all felt her injury. Naide is extraordinarily hardworking and courageous and nothing to stop her, and she will always be a great reason for national pride.

What were the traits that you admired most in her?

Resilience. Naide is very resilient and persistent and always seeks to conquer adversity.

In your opinion, what are the major difficulties that athletes face when they retire from their sport careers?

Athletes should start planning their life after sports while they still athletes.

We think that the major difficulties are psychological. It cannot be easy to accept that your career will end someday and you will have another life after sports – and your sport glory days as an athlete will not last forever – wich mean that at some point you will stop doing exclusively what you love (at least in the way you know so far), and need to find a different passion or adapt it to a different life style.

What do you think society could do to facilitate the reintegration of athletes?

We believe that for now, it is important to continue promoting the Dual Career, as well as their sports clubs and national sport committees should provide social, psychological and vocational support to their athletes.